Supporting health, fitness and wellbeing in the Lloyd's community

The hidden pandemic in LGBTQ+ communities

We only have to pick up our phones or read the news to learn about the various discriminations that members of the LGBTQ+ community face on a daily basis. These range from micro-aggression on the street to the more jarring forms of harassment and hate crime that make it into news headlines. Beneath this swirl of inequity and discrimination within society, however, lies a far quieter and more ubiquitous problem. This is the hidden pandemic of mental health inequality, which renders LGBTQ+ people almost twice as likely to suffer from isolation, loneliness, anxiety, depression and low self-esteem compared to their cisgender and heterosexual peers.

It requires constant effort to live in a world in which you are made to feel like you don’t fit in. Part of the burden of being a member of a marginalised group entails confronting stigmas and social norms that add significant pressure to the ability of LGBTQ+ and other marginalised people to function in their everyday lives, at work and with their friends.

The Lloyd’s Wellbeing Centre aims to put mental health back on the calendar this Pride month, recognising the ways this hidden pandemic creates significant hardships for LGBTQ+ communities that others do not necessarily have to endure. We want to promote education and awareness about mental health inequality, as well as provide some of the tools and support necessary to address this hidden crisis among our LGBTQ+ peers.

Addressing the everyday hardships that minorities face forms part of a wider struggle to create a more inclusive, diverse and health-creating world. We can’t improve our health and wellbeing, after all, without simultaneously taking into account the gaps in our lived experiences that shape the ways members of different groups within society feel, think and act in their everyday lives. Let’s unite for thriving mental health this Pride month!

Uniting for thriving mental health and wellbeing this Pride month means promoting education and awareness about the realities that affect the day-to-day lives of LGBTQ+ people. Did you know that LGBTQ+ people are nearly twice as likely to suffer from poor levels of “self love” compared to their heterosexual peers? Interestingly, a 2020 “Self Love Index” undertaken by The Body Shop exposed the hidden self love crisis affecting almost half of the world’s population. What is staggering is the way self love appears to be even more of a problem for those who exist outside the norms that society prescribes.

Self love can be defined as a positive relationship with ourselves that results from actions supportive of our mental and physical health. It is a sad reality that many LGBTQ+ people have internalised the idea that they are less worthy of being loved, and hence less worthy of a thriving state of general wellbeing. The poor levels of self love within LGBTQ+ communities draw attention to the need to tackle prejudice and work towards a more inclusive society for all. For those wanting to make a difference this Pride month, this means starting with those around you.

The health and wellbeing factors affecting LGBTQ+ communities, however, go further than the problem of self love. LGBTQ+ people are almost twice as likely to suffer from poor mental health when compared to their heterosexual peers. An alarming 2018 “LGBT in Britain” health report commissioned by Stonewall revealed that half of LGBTQ+ people (52%) reported having experienced depression in the past year. One in eight people aged 18 to 24 (18%) reported having attempted taking their own life, with numbers increasing for those over 24. The situation is worse for members of the non-binary and transgender communities, of whom almost half consider taking their life every year. Furthermore, the problem of stigmatisation prevents LGBTQ+ people from seeking help, with one in seven (14%) having avoided treatment for fear of being discriminated against.

LGBTQ+ people face a particular set of challenges at work that can negatively impact their mental and emotional wellbeing. Raising awareness about this can help to address problems ranging from micro-aggression and discrimination among work colleagues to the discrimination LGBTQ+ jobseekers frequently encounter in the job market. A recent study undertaken by Anglia Ruskin University found that gay and lesbian jobseekers are up to 5% less likely to be offered job interviews compared to heterosexual jobseekers with the same skill set and level of experience.

The situation is different in the office environment itself. Relatively few of the total discrimination cases reported by LGBTQ+ people at work every year involve overt forms of harassment and hate crime. Most, in fact, involve subtler and less visible forms of discrimination among work colleagues, for example unconscious exclusion within teams or work groups, or micro-aggressions that communicate hostile, negative or derogatory attitudes towards LGBTQ+ people. These experiences are comparable to the forms of workplace discrimination faced by women and people of colour (POC).

These discriminatory practices can have a negative impact on the mental wellbeing of LGBTQ+ employees, as members of these communities have to deal with the additional pressure of managing negative and hostile work relationships. The fact that these discriminatory practices frequently take place unconsciously and out of sight furthermore means that they can be even more challenging to deal with.

How you can become a better LGBTQ+ ally

Pride month provides the perfect opportunity to reassess how you can become a better ally to LGBTQ+ communities in the UK and abroad. By becoming more attuned to the struggles that affect LGBTQ+ communities disproportionately, you can help tackle the hidden pandemic of mental health inequality and create a better and more inclusive world for all. Below we list some of the ways you can play your part this Pride month. 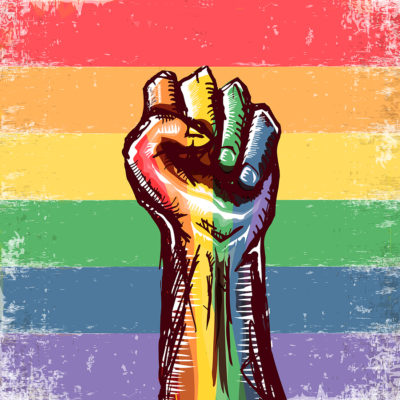 Promote Education and Awareness – Spread the word this Pride month and let the world know about the struggles that affect LGBTQ+ communities disproportionately. Promoting education and awareness among our friends will help us to break the silence around the issues that affect marginalised groups. There is a plethora of books and online resources available to help you understand the facts and what you can do about them.

Remember your privilege – Becoming more educated around LGBTQ+ issues means becoming better acquainted with the privileges that attach to different groups within society depending on their gender, sexual orientation, race and ethnicity. The fact is that heterosexual members of society do not have to face the same kinds of stigmatisation and discrimination that LGBTQ+ people face daily. Acknowledging this will help us to have a more honest and open discussion about the world we live in.

Don’t make assumptions about others – Try not to assume that your friends, families and those around you are heterosexual. These assumptions feed into a culture of heteronormativity and can be immensely harmful to those who feel like they have to live up to the expectations of others. Data taken from the annual population survey found that the number of people identifying as gay, lesbian or bisexual in the UK rose from 1.6% in 2014 to 2.2% in 2018. The numbers are significantly higher when we take into account the number of people who feel they cannot disclose their identity. The latter is a problem in itself.

Declare Your Pronouns – Many LGBTQ+ people declare their preferred pronouns in advance, for example through the insertion of a “she/her” or “he/his” pronoun on their social media profile or email signature, in order to prevent confusion and ensure that they are addressed in the desired manner by friends and colleagues. This practice is particularly prevalent among members of the non-binary and transgender communities. LGBTQ+ allies can support this practice by encouraging their peers to participate and declare their pronouns.

We hope that the above suggestions can be of assistance to those wishing to play their part this Pride month and stand up for a more diverse, inclusive and health-creating world.

Happiness is good for your wellbeing
22 March 2022

The importance of nature for mental wellbeing
10 May 2021

Caring for Your Mental and Emotional Wellbeing
28 January 2021

This site uses Akismet to reduce spam. Learn how your comment data is processed.